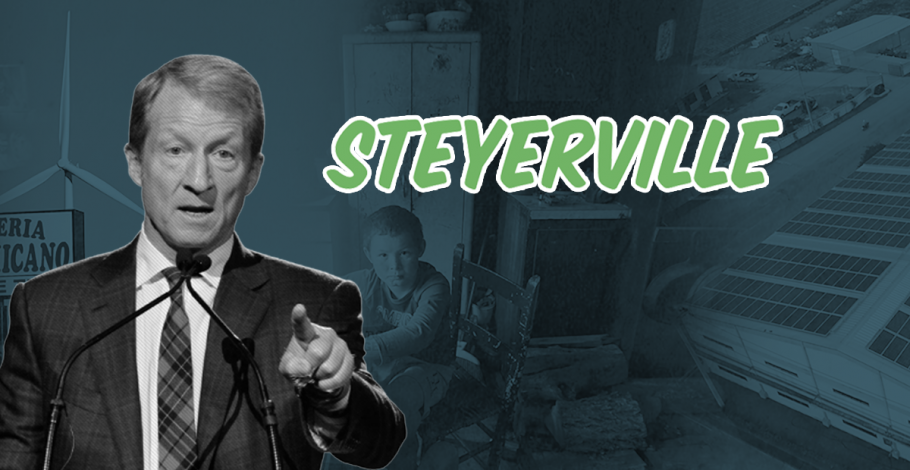 We launched Steyerville.com as a project of Power The Future to hold Tom Steyer (and Mike Bloomberg, George Soros and other billionaire ideologues) accountable for their eco-activism. The local environmental groups they fund, along with paid activists and media allies, have destroyed small towns all across America by taking away their industry, their source of personal income and their local tax revenue. They celebrate withholding access to land or closing mines, but their activism has huge consequences for local communities.

They have never been to Steyerville, so we brought Steyerville to them.

Unable to get State and Federal energy-crushing laws passed, Steyer and his ideologues pay protestors and bus them to key areas. The paid college activists and holdover 60’s hippies make noise, generate media buzz, and ultimately sway local decision makers. And once these phony protestors take their feigned indignation home, Steyerville is what’s left. A once thriving community that had prosperity and industry is reduced to unemployment. What follows is inevitable: poverty, welfare, depleted tax revenue, shrinking home value, increased drug use. Our research begins in forgotten counties in Ohio, Pennsylvania, and West Virginia, and but this is just the start. There are many Steyervilles across the country, and we want to document them all.

This effort is larger than just coal country in the midwest. It will grow to include industry-dependent communities in New Mexico, Texas, Louisiana, and Alaska. And if we can, we may even expand it beyond the energy industry including manufacturing, agriculture, and other sectors that have been shut down by the radical ideology of a billionaire who has never visited them.

Where is Steyer? Where are the paid minions he unleashed on these small towns to do his bidding? Where is the pledge to help them rebuild their lives or bring new industries to their town? No where. The Sierra Club and Michael Bloomberg celebrate closing coal plants, like the one in Titus County, Texas. The hundreds of men they lay off aren’t even mentioned in their self-self-congradulatory press release.

Every family that has to split up to find a job, every school that has its budget cut, every unemployment check, every opioid overdose is the fruit of Steyerville. It’s what unchecked, unchallenged, misguided political ideology does to communities where political billionaires don’t buy summer homes or play golf. Roughly 85 years after branding destroyed communities “Hoovervilles”, we will give these towns an apropos name of patron.

We started Power The Future to advocate for the men and women who work in the industry, and we can only do that sincerely if we point out why their jobs are at risk. And we will dedicate ourselves to making sure Steyerville doesn’t continue to spread. If you have a Steyerville you’d like to share- a town destroyed by unchecked, outside activism, let us know daniel@powerthefuture.us