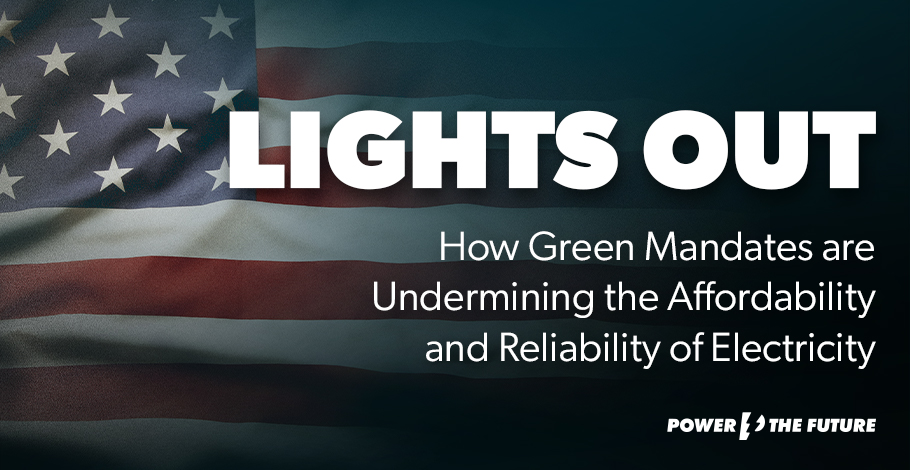 On Earth Day, President Biden pledged under the Paris Climate Agreement that the United States would reduce greenhouse gas emissions by 50 percent in ten years (below 2005 levels). This goal is as preposterous as it is impractical. It’s clear that the Biden Administration is misleading the American people to impose the Green Agenda which includes stifling bureaucratic manipulation in every sector of the economy.  Power The Future’s latest study Lights Out: How Green Mandates Are Undermining the Affordability and Reliability of Electricity explores the real costs and benefits of Biden’s plan.

Biden’s Climate Envoy John Kerry has himself admitted: “Almost 90 percent of all of the planet’s global emissions come from outside of U.S. borders.  We could go to zero tomorrow and the problem isn’t solved.”

On this, as in little else, Kerry is right: Even assuming every signatory to the Paris Agreement (the US included, as pledged under President Obama) fulfilled its emissions commitments, the climate impact “is minuscule.”  In measuring the temperature impact of every nation fulfilling every promise by 2030, the total temperature reduction would be 0.048°C (0.086°F) by 2100.  Carry those assumptions out another 70 years, and Paris would reduce temperatures by just 0.17°C by 2100.

So what can we realistically expect from the types of proposals Biden is pushing? PTF looked at the results of renewable mandates in Texas, California, and New Mexico to find out.

Based on data from those states, it is clear that Biden’s pledge under the Paris Agreement sets the country on a dangerous trajectory.  Green radicals will use it to push their fever dream of a 100 percent “clean” grid, powered by sources that don’t work at night or on cloudy days. These policies destroy good-paying jobs and raise energy prices.  It’s time to wake up to these realities with policies that promote fuel diversity, reliability, and affordability—before it’s too late for all of us.