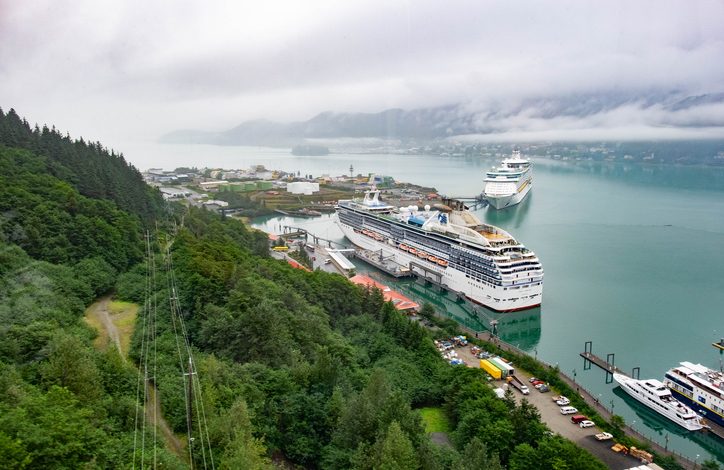 When COVID-19 shut down the multi-billion dollar Alaska tourism industry in 2020, the economy in Southeast Alaska was decimated.  Thousands of seasonal workers, hundreds of small business owners and communities from Prince of Wales Island to Haines struggled to find new opportunities to fill the devastation brought about by the shutdown.

Much like small communities along the Railbelt – from Seward and Whittier north to Fairbanks – the vast majority of Southeast Alaska’s residents knew that 2020’s struggle would need to be a one-year event.  Although hundreds of small business owners were able to weather the storm last year, a second cruise-less summer would be exponentially more dire.

Somewhat shockingly, 2021’s season was put in immense jeopardy earlier this year. Citing continuing concerns over COVID-19, the Canadian Transportation Ministry extended the prohibition of any passenger cruise vessels carrying over 100 people between Canada and Alaska. The order extends through February 2022.

The decision, made without any input or consultation with the United States, was met with swift and strong rebuke from Alaska’s Congressional delegation.  They’ve urged the Biden administration to take action to save the tourist season, by providing a temporary waiver to the U.S. Passenger Vessel Services Act.  That waiver would allow cruise ships to sail from American ports, like Seattle, directly to Alaska. Adopted in 1886, the act still prohibits cruise ships from sailing directly between American ports, forcing Alaska-bound vessels to either start from or stop in Canada.

In spite of the heavy political pressure and ramifications of inaction, there has been no public progress made.  This has led the major cruise lines to cancel all tours until July, with more cancellations expected if a solution isn’t generated soon.

But, as bad as it has been in 2020 and the start of 2021, it could get even worse for Juneau and its business community.  Juneau is currently and historically a highlight stopover for all Southeast Alaska cruises.

According to an article in the Juneau Empire, some feel Alaska’s break from cruise ships could be a good thing. Karla Hart, a Juneau resident and co-founder of the Global Cruise Activist Network, said in a phone interview Tuesday the pandemic had paused the tourism industry in Alaska but not the growth of the cruise ship industry overall.  She calls the problem “overtourism”.

“It’s like a big cork, and as soon as it goes, we’re going to get flooded again,” Hart said. “Not taking advantage of this opportunity to rethink what we’re doing seems shortsighted.”

So her group has proposed three ballot measures for Juneau.  All would further decimate the cruise industry.  One initiative would establish cruise ship hours of 7 a.m.-7 p.m., outside of which ships carrying 250 passengers or more could not be docked or anchored in Juneau, according to a news release from Hart. Another would ban all cruise ships with 250 passengers or more on Saturdays and the third would entirely ban cruise ships larger than 100,000 gross tonnage after Jan. 1, 2026.  It should be noted that nearly every existing ship from Carnival, Holland America and Princess have gross tonnage exceeding 100,000, with the largest ships in the fleet exceeding 150,000 gross tonnage.

So, if the eco-Left gets its way, Southeast Alaska will lose more private-sector jobs.  It will become less business-centric and more government-centric.  Citizens of Juneau will bear the brunt of the economic loss, and out-migration will continue in the Capital City.

Great “neighbors” the Global Cruise Activist Network are.  With friends and neighbors like that, who needs enemies like the ENGOs that are so diligently working to stop mining, timber and other resource extraction efforts throughout Southeast Alaska?