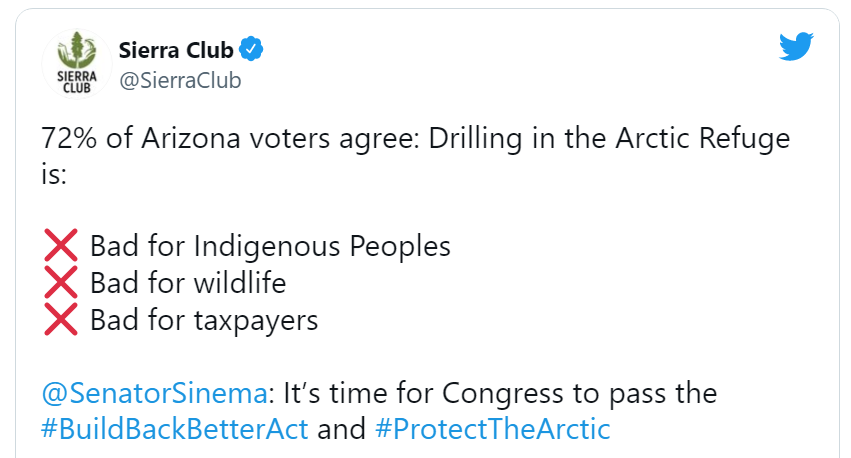 A recent Tweet from the Sierra Club got our attention, then we remembered the eco-left doesn’t have to worry about the little things…like credibility.

The Tweet stated that 72% of Arizona’s voters were against drilling in Alaska’s Arctic National Wildlife Refuge (ANWR) for a number of reasons.  It then listed them, encouraged Arizona US Senator Krysten Sinema to overturn drilling regulations as part of the controversial “Build Back Better” Act, and showed a beautiful picture of what is presumably ANWR wilderness.

Except the Tweet wasn’t – and couldn’t be – factual with nearly any of its information.

First, according to the Arizona Secretary of State’s office, just over 4.3 million Arizonans are registered to vote.  The Tweet didn’t say they sampled those voters and didn’t link to any polling.  It simply said 72% of voters were against drilling.  The problem?  It’s extremely unlikely over 72% of Arizona voters (more than 3.1 million of them) could know the borders of ANWR to have an opinion against leasing in the refuge.  But the credibility gap doesn’t stop there.

Second, the indigenous tribe that lives closest – in fact, within the boundaries of the Coastal Plain of the Refuge, where the actual drilling would take place – are the Inupiat Eskimos in the village of Kaktovik.  They, and the entire region of Alaska closest to the existing exploration in Prudhoe Bay and the National Petroleum Reserve-Alaska (NPRA), overwhelmingly support responsible development of the lands near them.  They have jobs, first-world living conditions and more, as a result of the oil and gas development going on in their region.  The wildlife hasn’t been dramatically impacted, regardless of what the Sierra Club wants its social media followers to believe, and taxpayers will receive 50% of the royalties from each barrel of oil developed from ANWR’s Coastal Plain.  However, we saved the worst for last…the picture.

While the Sierra Club would like you to believe that oil and gas development is going to ruin that pristine landscape we see in the picture, the reality is that the Coastal Plain looks more like this:

Sierra Club, do better.  Tell the truth, instead of misleading your followers with blatant lies.  Full disclosure: Power The Future loves the potential for jobs, federal/state/local revenues and energy that will one day be available through responsible development in ANWR.  The Sierra Club?  They show regularly – including with this Tweet – that they value wildlife above human life, and fabrication over facts.