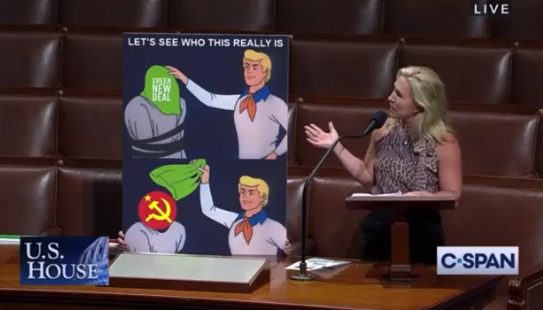 Yesterday, Congresswoman Majorie Taylor Greene spoke on the House floor and brought out a giant cardboard sign with a Scooby-Doo meme to make the case the Green New Deal (GND) is actually Chinese-style communism.

The Independent reports on Rep. Greene’s speech on the floor: she showed an image of Fred from Scooby-Doo unmasking an unknown villain with ‘Green New Deal’ written across the hood. Once unmasked, the hammer, sickle, and star from the Soviet flag are revealed. The Chinese Communist Party uses this symbol excluding the star as their emblem.

“If the American people actually knew what … these globalist, America-last policies are, I believe that they would be ringing every single phone up here, probably demanding that Congress go home because America is only safe when Congress is out of session,” she said. “But unfortunately Congress is in session so let’s tell the truth about what’s happening.”

Power The Future has previously outlined in a report how moving our energy grid to 100% renewable energy will push our energy dependence onto China, “America’s vulnerability is not just about China’s supply of [rare earth elements] REEs; China also overwhelmingly controls the processing of certain REEs. According to the Center for Strategic and International Studies, Chinese firms ‘control more than 85 percent of the costly processing stage of the supply chain and produced more than 70 percent of the world’s rare earth-metal supply in 2018.’”

“Talking about the Green New Deal and the all-out war on the men and women who built this country, which is definitely happening every single day here in Congress, Democrats want to turn out the lights on America. They want to shut down our economy, they want to end our energy independence, and surrender America, putting us on our knees, to China, dependent on China.”

While Rep. Greene animatedly points out this fact, it is true that moving our energy grid to 100% renewable energy would push our energy dependence onto China and deplete our hard-earned energy independence. The Green New Deal is a win for China and a loss for the United States, plain and simple.