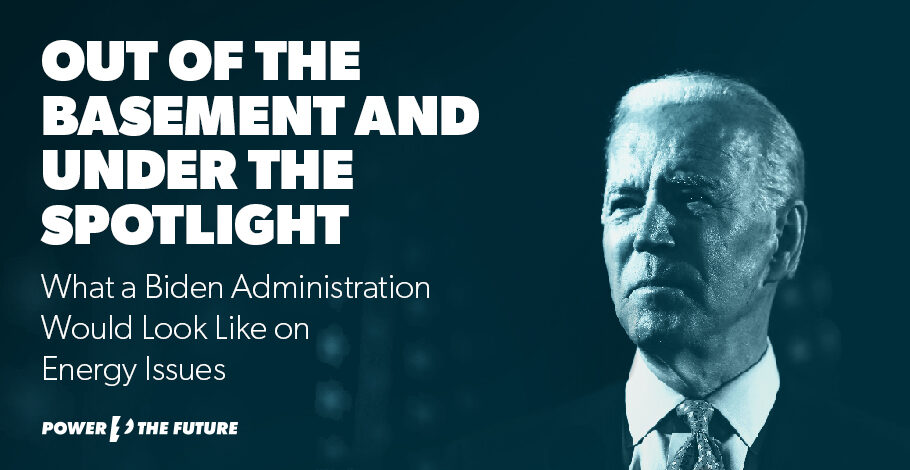 Today, Power The Future released a study: Out of the Basement and Under the Spotlight – What a Biden Administration Would Look Like on Energy Issues. The report covers his voting history, his rhetoric throughout nearly half a century in public office, and how the energy industry would be impacted under his watch. The study makes it clear: there is nothing moderate about Biden’s energy policy.

Biden has been pandering to the eco-left since day one of his campaign trail. He has appointed radical Members to his climate committee and actively chased the vote of “Bernie bro’s,” regardless of what he has to say. This pursuit has made his real agenda very clear. At a campaign speech in Iowa, Biden said, “I’m one of the first guys to introduce a climate change bill, way, way back in ’87.” Just two weeks later, in case his radical agenda wasn’t clear enough, he very plainly said, “I’ve never been middle of the road on the environment.”

This surprised many voters, who perceived Biden as a moderate Democrat. But, his voting record tells a very different story. Prior to serving as President Obama’s vice president, Biden spent 36 years in the Senate. During those 36 years, according to the League of Conservation Voters, he amassed an impressively leftist 83 percent ranking. By comparison, Senator Bernie Sanders (I-VT) – the face of the eco-left – has a lifetime score of 91 percent.

From 2001 to 2008, Biden voted for “pro-environment” policies 87 percent of the time. Compared to the other 33 Democratic senators in office during that time, only 8 received a higher ranking. Notably, Hillary Clinton and John Kerry both received lower ratings, of 80 percent and 76 percent, respectively.

Still, despite a far-left voting record, Biden has become progressively more radical throughout his presidential campaign. Particularly after his decision to make Senator Kamala Harris (D-CA) his running mate – a sponsor of the original Green New Deal – there’s no more hiding the truth: Joe Biden is not, and has never been, a moderate Democrat.