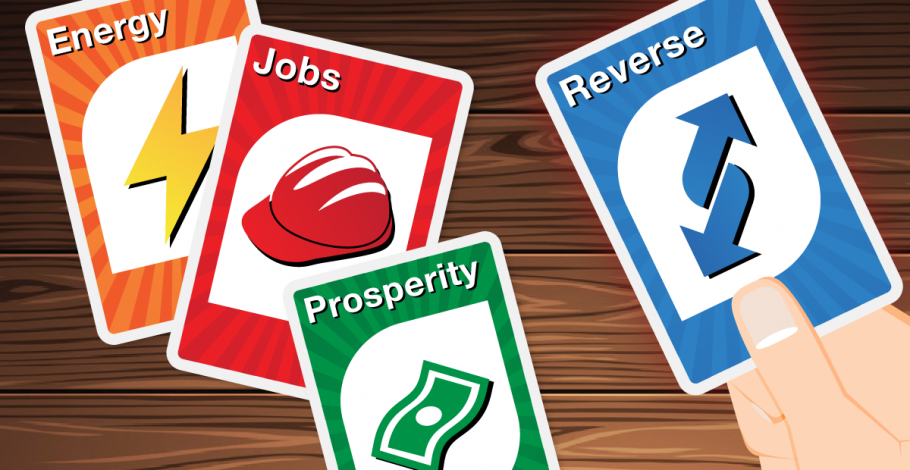 “The only difference between men and boys is the price of their toys”.

And what toys Tom Steyer can afford with billions and billions of dollars!  He can hire staff and open offices around the nation, recruiting college students to push his agenda.  He can fly around the nation to speak to leftist conferences packed with dozens of hand-selected sympathetic listeners.  He can commandeer airtime buying $40million worth of commercials to plaster his face on TV screens in homes in every state.  He can buy legislators and legislation, whether it’s environmental laws in Michigan or gubernatorial candidates in Florida.

As some retirees pick up woodworking or fishing, Tom Steyer has picked up politics in his silver years.

And it is not a joke.  It isn’t fantasy sports where winning or losing has no consequences.  It isn’t a rich man playing the slot machines where a loss is only pocket change.  It’s our economy.  It’s our workers.  The nation’s energy industry is not a playground or a hobby.

It is not a game.

Tom Steyer is tinkering in Colorado.  He is funding millions of dollars into pushing an agenda that will destroy the energy industry.  Advancing Prop 112 would cost Colorado:

He doesn’t live in Colorado.  His family isn’t dependent on the tax revenue for a quality education in Colorado schools.  His livelihood won’t vanish.  His house won’t decrease in value.  His community won’t see a rise in food stamps, crime, and opioid use when his rural neighbors lose their job, something we have documented on our site steyerville.com.  For Tom Steyer, and billionaires like him who see politics as a game, the outcome doesn’t matter.  For the real people who will feel real impact, it’s so much more. Rural communities depend on coal, oil, gas, fracking and subsequent employment to feed their families and pay the bills.  There is so much more at stake than tossing around millions to Colorado activists for nonsensical, unscientific, blind activism disguised as care and compassion.

There is no compassion when your politics puts another on unemployment.

“Believe in Science”.  We hear that cry nonstop for the radical green groups as they push the climate change agenda into law.  Yet they cannot point to contaminated air or water (other than the pollution caused by the highly-political Obama era EPA).  The science in Colorado is clear: the economy is growing, prosperity is growing, the state is growing.  Even the current governor, a fairly progressive individual, opposes Prop 112.  The science shows a thriving energy industry coexisting with a clean and healthy environment.

Not good enough for Tom Steyer.  He knows better and will spend millions to push an agenda onto the people of Colorado, consequences be damned.  This gives cover to the Democrat gubernatorial candidate, Jared Polis, who can pay opposition lip service, despite previously supporting similar measures.

The ethereal “ice caps” and “sea levels” and vagaries of “clean air” yield to the finite, real, tangible Mr. and Mrs. Energy Worker whose jobs will be taken, whose school will be underfunded, whose neighborhood will be ruined if Prop 112 passes.  Tom Steyer wants us to “believe in science”.  We want him to believe in people.

Power The Future will point out that Prop 112 will crush Colorado’s growing economic success.  We will point out that this is a serious issue, and Tom Steyer’s money, influence, and tinkering is not welcome.  He should take his millions and his ideology back to his hometown of San Francisco and out of the lives of regular Coloradans who are not his toys.

Colorado’s economic future is not a game.