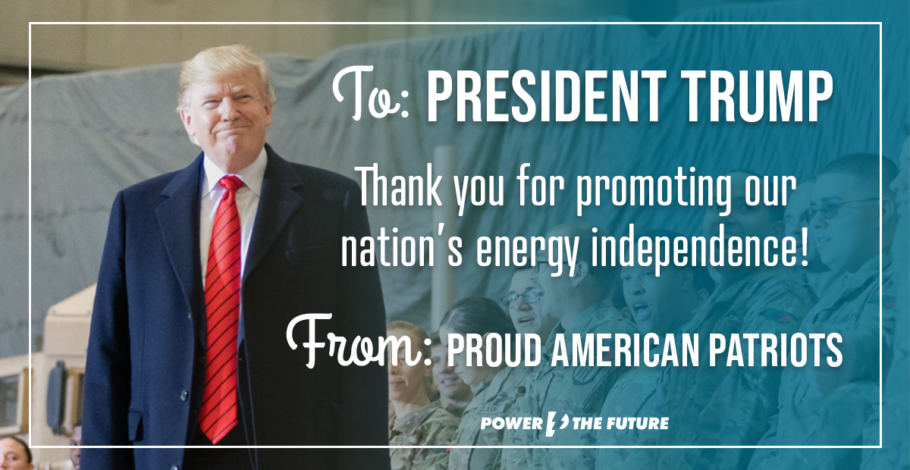 As the calendar turned to a new year, thousands of patriots took the time to express their gratitude for President Trump and his America-first energy policies. Of the many benefits enjoyed by Americans throughout the Trump Presidency, achieving “energy dominance” has been a critical step in making America great again. Most recently, these benefits have taken shape in our conflict with Iran. But, as Power The Future Founder & Executive Director Daniel Turner has noted before, energy independence positively impacts nearly everything:

The price and availability of oil, natural gas and other forms of energy affect the cost of everything – not just the cost of filling up your vehicle at the gas station. It takes energy to grow our food, manufacture products and deliver those products to stores and to our homes.

In more extreme cases, before our newfound energy independence, the United States became a hostage to foreign powers’ decisions, hurting our national security and ultimately leading to gasoline shortages, rationing, and even theft. However, President Trump’s pro-energy policies have taken advantage of the full range of America’s domestic energy potential, protecting both the economy and national security.

Iran and America’s other enemies would like nothing better than to see the Democratic “green” policies implemented, because those policies would strike a tremendous blow to America’s national security and make us far more dependent on oil and natural gas from the Middle East. This would give Iran considerable leverage over the U.S. and making it less likely that we would resist Iranian efforts to spread terrorism and develop nuclear weapons.

President Trump’s confidence in making the decision that led to Iranian General Soleimani’s death clearly demonstrates the success of our new energy policies. President Trump put the safety of American citizens first knowing that Iran had no leverage over the U.S. in terms of oil. While prices increased in the immediate aftermath, they quickly stabilized as tensions died down and had little effect on Americans.

Predictably, Democrats and far-left environmentalists remain too short-sighted to appreciate the complex benefits of President Trump’s policies. Fortunately, every-day Americans understand that we cannot abandon our American values of freedom and security in the name of far-left talking points.

Unfortunately, radical environmentalists have convinced millions of voters that oil, natural gas and coal are destroying our planet and that we can get by just fine on renewable energy sources like solar, wind and wave power. That may be the case far in the future, but there is no way that we will be able to produce that much renewable energy in the next few decades.

The signatures of thousands of patriots express the gratitude felt by Americans around the country for President Trump and the security provided by his new energy policies. Energy dominance has made America strong again, just as President Trump promised.

Energy independence
Back to Blog Posts