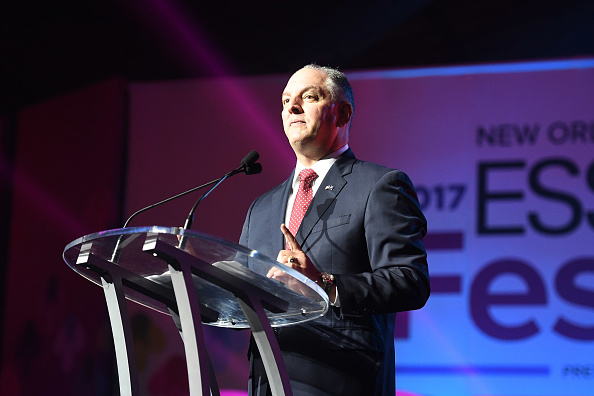 Under President Donald Trump, America is finally on track to fulfill a longtime bipartisan goal and become energy independent. Thanks to advancements in technology and a friendly administration, domestic oil and gas output is surging, and we’ve become a net oil exporter for the first time in 75 years.

Today, President Trump is traveling to Louisiana to tout his energy wins and highlight the state’s “booming southwest industrial hub.” He will appear at an LNG export facility that is expected to create 10,000 construction jobs.

On the heels of his visit, Governor John Bel Edwards (D), who is up for re-election this year, released a campaign advertisement touting his state’s booming energy industry.

The problem? The ad is deeply misleading and insulting to energy workers.

“Today the eyes of the nation turns to Southwest Louisiana as President Trump recognizes our energy industry,” said Edwards.

But Governor John Bel Edwards is no friend of energy workers. Edwards takes credit for the state’s booming energy industry, but that boom is in spite of the governor’s efforts to stifle the industry, not because of him. Despite warnings that hundreds of jobs would be lost, John Bel Edwards coerced parishes into supporting a legal barrage against the energy industry, a lawsuit spearheaded by a law firm that raised $2 million to help get him elected.

Louisiana is an example of how President Trump’s pro-energy policies create jobs across the country. Because America is able to export more natural gas, companies must invest in export facilities, and states like Louisiana, which have ports on the Gulf Coast, stand to benefit.

It has nothing to do with John Bel Edwards, and he should be called out for taking credit for the actions of others.

Gov. Bel Edwards “Sought To Conscript” Coastal Parishes In Louisiana Into Suing The Oil And Gas Industry By Threatening To Deny Them Money From Any Future Settlements. “The oil and gas industry rejected Mr. Edward’s ultimatum, so instead he sought to conscript coastal parishes into suing the industry by threatening to cut non-joining parishes out of any future settlement cash. Six parishes obliged.” (Allysia Finley, Opinion, “The Governor And Louisiana Lawyers Plot An Energy Shakedown,” The Wall Street Journal, 3/2/18)

In 2016, Gov. Edwards Called On Local Parishes To Sue For Damages From Oil And Gas Firms Over Damage Caused By Drilling And Dredging On Louisiana’s Coastal Wetlands. “Gov. John Bel Edwards plans to step up the fight to win damages from oil and gas companies for their role in damaging Louisiana’s wetlands over many decades, saying Wednesday that he wants all coastal parishes to join in litigation against the energy industry. If the parishes don’t sue, the state will, Edwards said. That’s a much more aggressive role than the state has ever before taken on the issue, and it would represent a major expansion of the legal effort already underway in four parishes to hold numerous oil and gas companies accountable for the damage caused to the state’s coastal wetlands by nearly a century of drilling and dredging.” (Jeff Adelson, “Gov. John Bel Edwards: State Will Sue Oil And Gas Companies Directly If Parishes Don’t,” The Advocate, 9/21/16)

Gov. Edwards’ Position Was At Odds With Attorney General Jeff Landry (R-LA), Who Sought To Block Gov. Edwards From Hiring Outside Attorneys To Sue On The State’s Behalf. “Edwards’ position promises to ratchet up hostilities between him and state Attorney General Jeff Landry, who initially appeared to support the coastal erosion suits but recently has sought to block the governor from hiring outside attorneys for the effort and has welcomed legal setbacks for the parishes.” (Jeff Adelson, “Gov. John Bel Edwards: State Will Sue Oil And Gas Companies Directly If Parishes Don’t,” The Advocate, 9/21/16)

Gov. Edwards Said He Would Instruct The Department Of Natural Resources To Sue On The Parishes Behalf In Defiance Of The Local Leaders Wishes. “In his letter to 16 coastal parishes, Edwards gave them 30 days to reply. He upped that to 45 days following the meeting with the two parish presidents. He will instruct the state’s department of natural resources (DNR) to sue on behalf of the parishes if they do not hire lawyers. Four parishes have already filed suits against oil and gas companies, Jefferson, Plaquemines, Cameron and Vermilion. These continue to toil in state court and in some cases, remain there for years.” (John Breslin, “Governor Urged To Retreat From Threat To Sue Oil And Gas Companies,” Louisiana Record, 10/10/16)