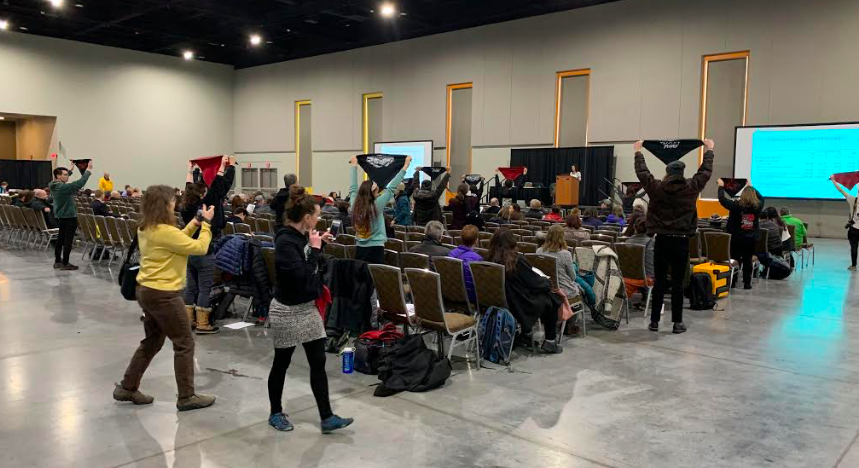 Power The Future Alaska State Director Rick Whitbeck was defending responsible energy development in ANWR during a public meeting in Anchorage last night when “Antifa-style” eco-extremists verbally assaulted and issued a “terroristic threat” against him.

Whitbeck, representing Power The Future, was given the opportunity to read a brief statement during the Department of Interior public meeting about proposed resource development in ANWR. Watch his speech here.

One eco-extremist threatened Whitbeck at the end of his speech, reports Must Read Alaska.

When Power the Future spokesperson Rick Whitbeck spoke on behalf of resource development and the distance the drilling site is to Gwich’in land, he was shown the middle finger by some protesters, was booed by others and received at least one terroristic threat:

“I’ll will fu–ing own your scalp!” one of the protesters said to Whitbeck as he closed his presentation.  “F–k you, white man!”

A member of the eco-extremist group “Defend The Sacred” was likely behind the attack. Last week they “disrupted” a similar meeting in Fairbanks “with drumming, chanting, and yelling.” At last night’s meeting, they showed up “wearing Antifa-style bandanas, covering their faces” and throwing “F-bombs and extended middle fingers.”

Extreme environmentalists like these don’t have the facts on their side, so they resort to intimidation and verbal assault to get their way. It shows how little respect they have for the process of responsible energy development, and how little they value the energy workers who power their own homes, cars and way of life.

When eco-extremist groups engage in “terroristic” threats, they reveal just how childish they are, and lose public support.

Power The Future will not be intimidated and deterred by these fear-mongering tactics, and we will continue to speak out for resource development in ANWR.