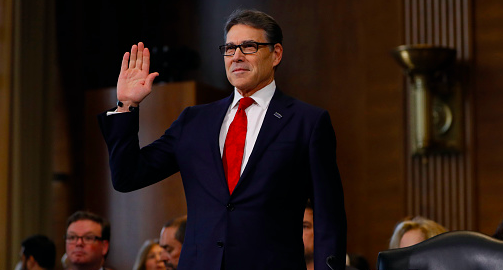 We may be on the verge of a historic environmental debate, if Alexandria Ocasio-Cortez accepts the challenge.

Yesterday, CNBC reported that Secretary of Energy Rick Perry would “absolutely” have a conversation with Ocasio-Cortez about the Green New Deal. But will Ocasio-Cortez join the debate? It remains to be seen, but the answer says a lot about the future of the controversial plan.

If the Green New Deal is such a great and urgently needed policy, will Alexandria Ocasio-Cortez do everything possible to make it a reality? Or is this just a PR stunt from the freshman Congresswoman intended to rile up the far-left?

One way to test this is to see whether she will meet with Perry to discuss her plan.

“I think having a conversation about the Green New Deal is a good thing — and to do it in a thoughtful and a polite and a respectful way,” said Perry.

He continued, “Just because someone doesn’t agree with what I believe in, or I don’t agree with their take, doesn’t mean we don’t need to continue to have a conversation. I think it’s wise to have those.”

This is exactly the correct sentiment to have. The Green New Deal would never stand up to the scrutiny of reasonable, respectful analysis. Without twitter slogans and hashtags, it’s obvious the plan is ridiculous. It’s time Ocasio-Cortez actually sat down with someone from the other side to discuss her plan.

Secretary Perry is giving Ocasio-Cortez an opportunity here to lay out her case for the Green New Deal outside of social media and campaign-style events.

If we’ve learned anything about Alexandria Ocasio-Cortez and the extreme left in recent months, its that the rhetoric falls flat when put under scrutiny.

Whether Secretary Perry is the one to put the Green New Deal under the microscope remains to be seen. Whether it is him or a different party, though, the American people deserve to hear the other side of this debate so they can see for themselves just how dangerous the Green New Deal really is.