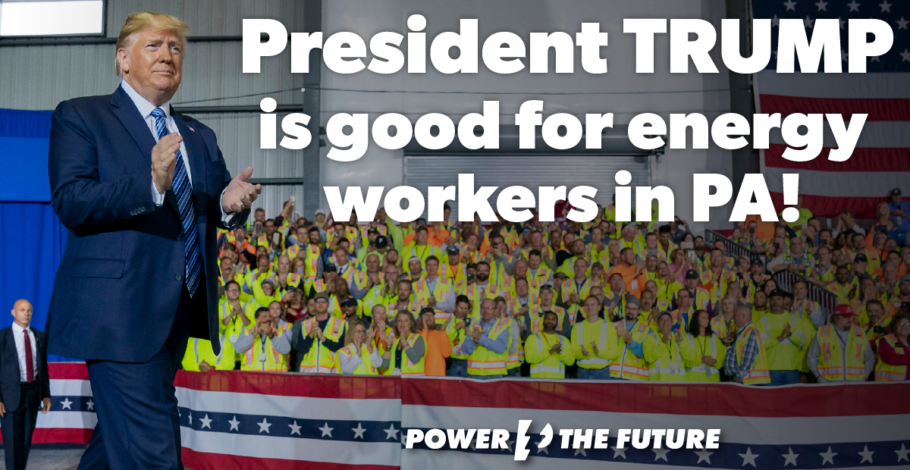 It’s unclear who the Democrat nominee for the 2020 ticket will be, with both Bernie Sanders and Joe Biden still battling it out, and the majority of the delegates still up for grabs.  Each campaign has its eye on important swing states.  And today the incumbent President is headed to Scranton in the critical state of Pennsylvania.

Of all the cities in the Keystone state, it is curious that the Trump Campaign team chose the birthplace of Joe Biden, but we’ll just assume that’s coincidence…

One thing that is certain: Pennsylvania energy workers have a lot to fight for.  Several hundred thousand men and women work directly in the energy industry, and all their jobs are on the line.  The Green New Deal threatens their jobs (in coal, fracking, and pipelines) and threatens the entire state with huge cost increases.  Our recent study of the Green New Deal included Pennsylvania in its analysis.  Making all those homes “green”, converting all those vehicles to be “green”, and updating the entire electric grid to be “green” will cost the average PA household $75,000 in just the first year, and then more than $40,000 each subsequent year.

No doubt in his Town Hall tonight, President Trump will take about energy issues.  And no doubt whoever wins the nomination will spend tremendous resources in the state trying to woo and sway voters to their side.  But facts are facts, and the Green New Deal is a terrible plan for the commonwealth of Pennsylvania.

And it’s a terrible deal for the entire country.  Let’s hope the great people of PA remember their jobs, their communities, their livelihood in the midst of campaign promises and rhetoric.