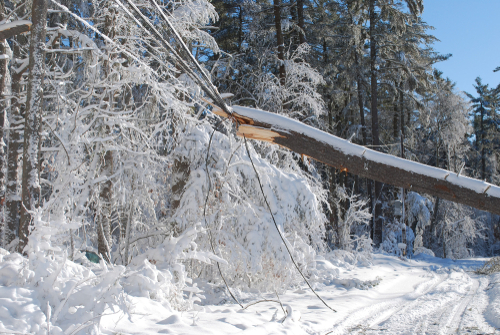 They say that March comes in like a lion and out like a lamb.  The first week of January certainly seemed “March-esque”, as intense storms throughout Alaska brought massive snowfall, drenching rain and hurricane-force winds to parts of the state.

Throughout Southcentral Alaska, nearly three days of sustained, 50 mph winds – with wind gusts of over 100 mph not uncommon – tore roofs off buildings, shattered windows, overturned semis and sent sheds skittering off of their foundations and across roadways.  This happened while temperatures were near (or below) zero, creating hazardous conditions throughout the most populated portions of the state.

The Lower 48 would call that weather a typhoon or hurricane and shut down for days.  Alaskans called it “windy” and were thankful for generators, pre-planning, and our frontline utility workers.

Crews from Matanuska, Homer, Chugach and Copper Valley Electric braved the intense weather to bring power back on to the nearly 100,000 Alaskans who lost it during the windstorm.  Those men and women, along with contractors and other utility crews, deserve every possible plaudit imaginable for their diligence to safely and efficiently work around the clock to restore their services.

Power The Future applauds their efforts, and knows that they are part of a larger utility workforce in the millions across America.  Those dedicated, frontline workers keep our power on, heat or air conditioning pumping, Internet connected and Americans safe and comfortable throughout the year.