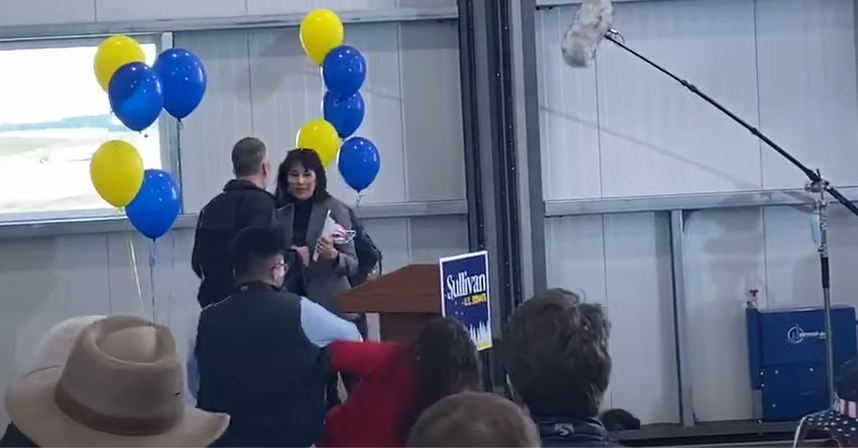 We all remember the stories:  Congresswoman Gabby Giffords shot at a constituent meet-and-greet in Arizona in 2011.  Congressman Steve Scalise and four others shot during a softball practice in 2017 in suburban Washington, D.C.

When candidates or sitting politicians host public events, the hopes are that allies will show up and bring emotional and monetary support for the campaign.  The facts are that there is an ever-increasing chance that political opponents – affiliated with rival campaigns and groups who disagree with one or more positions of the event host – will attend.  Sometimes, they even attempt to disrupt the proceedings.  Sometimes, those actions turn violent, as they did with the two events noted above.

Thankfully, that’s not what happened last Saturday at US Senator Dan Sullivan’s Anchorage campaign kick-off.  However, a number of protestors with ties to eco-extremist movements tried to “gift” the Senator with a bloody caribou heart, decrying his support for responsible drilling in ANWR’s 10-02 Coastal Plain, among other positions.  The group planned to unfurl a banner reading “Heartless Sullivan”.

The activists were intercepted, headed off and directed outside of the event by eagle-eyed and quick-actioned Sullivan supporters, but not before the caribou heart was sent airborne toward the Senator and his wife, and the dissidents shouted anti-Sullivan cries.

The protestors – later identified as Will Bean, Erin Jackson, Kathleen Bonnar and Crystal Berwick, and organized by Rina Kowalski – are claiming their actions were supposed to be peaceful.  Looking at their backgrounds, however, shows significant connections to radical social- and eco-justice groups, whose tactics include purposeful and outrageous disruptive behaviors.

Kowalski is the founder of “Indigenous Lives Matter”, a subset of Native Movement, whose backers include Defend the Sacred Alaska (the extremist organization whose spin-off, the Gwich’in Steering Committee, has raked in millions of dollars to fight ANWR development, all in the name of an imaginary threat to caribou) and the Fairbanks Climate Action Coalition (who fight against responsible mining and natural gas use).  Bonnar is active with various justice movements, Jackson is a community organizer with Alaskans Take a Stand, whose efforts support groups including Recall Dunleavy (attempting to recall Alaska’s Governor).  Bean works at Native Movement and is a past political canvasser at the Alaska Center (For the Environment), who fights against responsible resource development at every turn.

Power The Future is glad Senator Sullivan and his wife weren’t harmed during the senseless actions of the disruptors and their protest.  We further decry the ever-increasing engagements by the eco-Left that could easily turn violent.