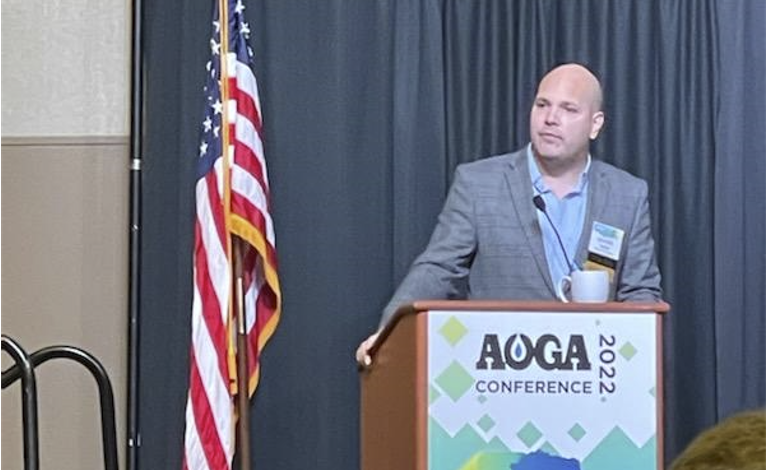 After 30 months and four rescheduled dates, the Alaska Oil and Gas Association held an in-person conference.  It was the first time most attendees had the opportunity to see friends and colleagues who advocate for responsible resource development across Alaska since the COVID outbreaks began in late 2019.

After the chance to exchange hugs and handshakes, the 300 or so attendees spent the day hearing from a wide variety of panelists on topics pertinent and related to the day’s theme, “Progress and Pathways”.  Kicking off the conference was a discussion on how the industry is using technology to decrease its footprint and simultaneously increase efficiency.

Power The Future’s Founder and Executive Director Daniel Turner joined Caroline Lobdell with the Western Resources Legal Center to discuss advocacy efforts to combat the misinformation of ENGOs and environmental radicals who fight the industry daily and attempt to stymie further oil and gas development while forcing a transition to ‘green’ energy.

A robust discussion with Cook Report’s Amy Walter and Republican Strategist Matt Rhoades looked ahead to how energy issues will play in the 2022 election cycle.  A recap of the 50 years since the passage of the Alaska Native Claims Settlement Act and how Alaska Native leadership has helped shape energy development on the North Slope and elsewhere were panel discussions during the day, as was a look back at the past decade and a discussion on the progress made by the industry, led by nationally-known industry strategist Rich Ruggiero.

Attendees heard from Governor Mike Dunleavy, DEC Commissioner Jason Brune and Alaska’s entire Congressional Delegation of Senators Lisa Murkowski and Dan Sullivan, along with Congressman Don Young, as well as state legislative leaders.  Each talked about how their respective organizations are working to grow opportunities in the oil and gas sector.

The main takeaway from the day was that our state’s energy future is bright, in spite of tremendous headwinds as a result of federal policy decisions designed to hurt traditional energy.

Kudos and congratulations go out to AOGA’s President and CEO, Kara Moriarty and her team of employees and volunteers for an outstanding conference.  Power The Future was proud to sponsor the day, and we look forward to further engagement with the men and women working across the state in the oil and gas industry.