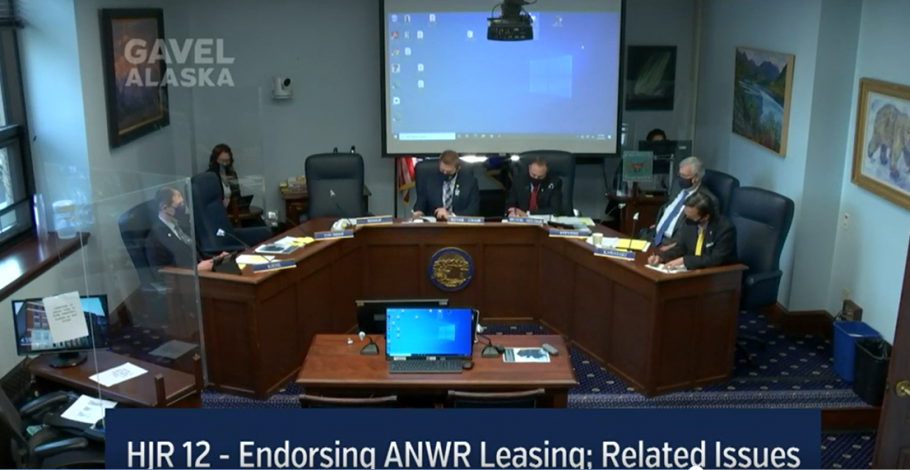 Wednesday’s schedule of the Alaska State Senate’s Resources Committee included testimony on HJR12, which Power The Future has featured twice on our website.  The resolution makes clear the Legislature’s support for responsible drilling in the 1002 area of the Arctic National Wildlife Refuge (ANWR) and asks the Biden administration to reverse its Executive Order that shuttered further progress toward development of the 1002.

The hearing included invited testimony from many of the pro-resource groups that Power The Future typically partners with, including the Alaska Oil & Gas Association, Resource Development Council, Alaska Chamber and Alaska Support Industry Alliance.  All four groups – and other presenters – laid out clear and compelling testimony on why the Senate should follow the Alaska House’s lead and support and pass HJR12.

But it was Matthew Rexford, the President of Kaktovik Iñupiat Corporation (KIC) and the Tribal Administrator for the Native Village of Kaktovik, who presented the most undeniable case for support for HJR12.

Rexford’s six-minute testimony, which can be viewed below in its entirety and is linked here in written form, laid out how his village – the only community within the boundaries of the 1002 area of ANWR – is supportive of responsible development.  But, he said, his people are angry, because the eco-Left has thrown millions of dollars around to usurp his peoples’ ability to be employed and benefit from its proximity to billions of barrels of oil.  He called out a Washington Post article from earlier this month, where there was no mention of Kaktovik nor the Iñupiat people who live in the refuge.

Rexford’s direct call-out of the Gwich’in Steering Committee (GSC), a radicalized group of “leave-it-in-the-ground”ers masquerading as an indigenous rights organization, showed how upset his village is over the misinformation and mischaracterizations the Gwich’in have thrown about on national and international stages.  The GSC lay claim to the lands of the 1002 as “sacred” in their heritage, and plead with whomever will give them airtime or column inches that they are the people most impacted by potential 1002 development.

Rest assured that Rexford, the village of Kaktovik and the Iñupiat people of the North Slope are supported by Power The Future, and we’ll keep fighting with them for their rights under federal and state law to benefit from their unique position near the rich oil and natural gas fields of Alaska.  To do anything else is an injustice to their culture, to their way of life, and to the enormous potential that lays beneath the 1002.