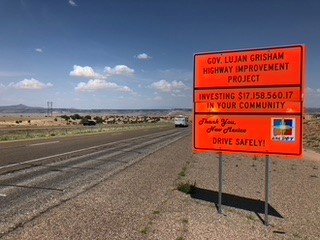 If you read the Governor’s signs, you would never know it’s the energy workers of New Mexico that provide over 40 percent of the state budget.

Driving along Interstate 25 near Santa Fe someone might notice the campaign sign announcing the $17 million improvement project as the “Governor Lujan Grisham Highway Improvement Project,” but the money didn’t come from her pocket.

Since taking office, Governor Lujan Grisham has championed New Mexico’s own version of the Green New Deal which one New Mexico senator has said will “kill more jobs than anything else.”

However, when it comes to New Mexico’s energy workers, Governor Lujan Grisham won’t just take all the jobs and all the money, it looks like she also wants to take all the credit.