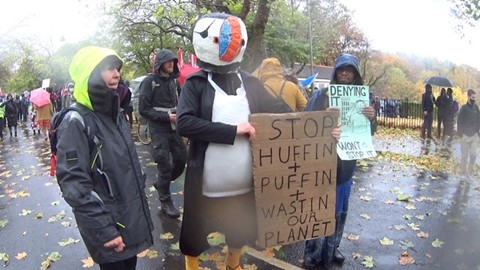 Pent-up demand following COVID lockdowns is partially to blame for the spike in energy prices – but only partially. You can thank President Biden for making this trend worse than it should be with costly and unreliable climate policies.

From prohibiting new drilling leases to cancelling the Keystone XL Pipeline, this administration seems to be doing everything it can to raise energy prices. But why is that? They want to make oil and natural gas, the fuels that literally power the world economy, prohibitively expensive. A recent study estimated that it would cost $2.1 trillion to reduce emissions by 80% by 2050—that’s $5,000 per American every year. One can assume that number includes the costs resulting from higher conventional fuel prices in addition to the even higher costs of alternative energy as it exists today. The government needs to support cost-saving innovations to all alternative energy sources, including nuclear power, in order for widespread adoption of those energy sources to occur. But they haven’t done that, and so Washington bureaucrats are able to push the American economy off a cliff without a parachute.

Proponents of the so-called “Green New Deal” and other green policies make arbitrary net-zero emissions goals without a scrupulous accounting of the costs. The WSJ reports,

The official independent assessment done in New Zealand shows achieving net zero by midcentury will cost 16% of its GDP annually by 2050. That is more than its entire current budget for social security, welfare, health, education, police, courts, defense and the environment—combined.

Given that there is no such thing as free money, New Zealanders will have to shoulder higher national debt, higher inflation, or simply cut essential government services to pay for net zero. Climate activists never acknowledge, even in passing, the costs of their misguided plans. The closest we ever got to that was in 2008 when President Obama admitted that energy prices “would necessarily skyrocket” as a result of his emissions policies. Joe Biden has brought many of Obama’s advisors back to the federal government and he seems to be copying his former boss’s climate playbook. We’re seeing the results now: skyrocketing prices, just as Obama predicted.

But even the benefits that climate activists promise are not grounded in reality. If the world’s biggest polluters don’t sign on, and they won’t, then “climate action” in wealthy countries will be for nothing. China and Russia didn’t even participate in the Glasgow Summit this fall. India said it will only participate if the rest of the world bribes them a tidy $1 trillion, which (hopefully) won’t happen. President Biden should reevaluate his radical energy policies that dramatically increase American household energy bills and do little to reduce emissions.