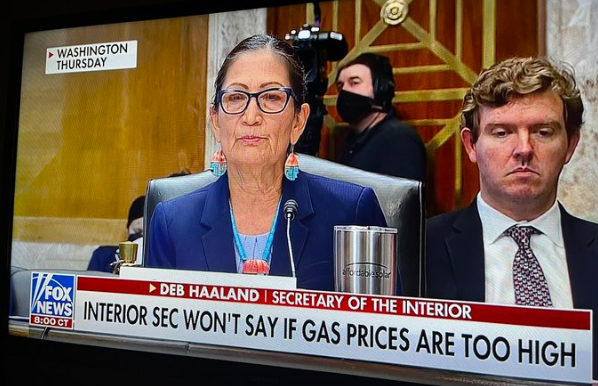 Biden’s Interior Secretary Deb Haaland won’t say gas prices are too high. In fact, she isn’t saying much of anything because she won’t answer questions from Senators. Yesterday, Haaland appeared before the Senate Energy and Natural Resources Committee to answer questions about her Department. During the hearing, Haaland would not give Senators straight answers – even to the most straightforward of questions.

Early in the hearing, Committee Ranking Member John Barrasso of Wyoming asked Haaland if she thought gas prices were too high. With gasoline prices breaking records for the highest-ever national average price for the 10th consecutive day, it was a simple yes or no question. She couldn’t admit they were:

Barrasso slammed her nonresponse. “So, it sounds like you’re unwilling to say gas prices are too high.” This was only the beginning of the Secretary’s non-answers.

Later in the hearing, Senator Mike Lee of Utah asked Secretary Haaland if her Department had conducted an analysis of how much oil prices would rise as a result of the cancellation of massive federal lease sales in the Gulf of Mexico last week. He was looking for a simple yes or no. Her response was “I’d be happy to get you that answer.”

Senator Steve Daines of Montana asked the Secretary to comment on the status of the official process to remove the grizzly bear from the endangered species list. The grizzly has surpassed every metric to be delisted. The Interior Department is well past the legally required time length for issuing a response on the delisting. Environmental activists have weaponized the endangered species list to keep energy producers and other developers from using their lands. Haaland had no response. She answered, “I will find out where that is, and I will make sure they are responding appropriately.” A politician’s answer for “not any time soon.”

Senator John Hoeven of North Dakota asked the Secretary about federal leases and if the administration would make more leases available. He asked her a straightforward question: “will you make those leases available at a time when our country badly needs it?” Haaland responded, “Senator, we will continue to do our work, just like we have since we came into this office.” That means no.

At a time when the American people are suffering, Secretary Haaland can’t or won’t answer basic questions. Gas prices are too high, and her Department is a big reason why.