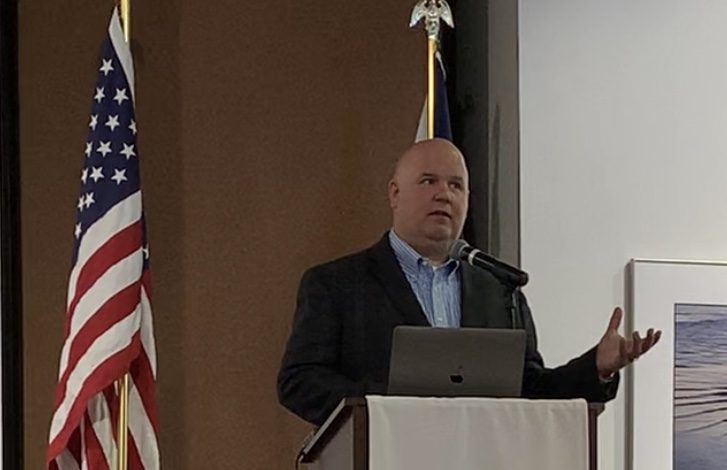 On Wednesday, June 5th, Alaska State Director Rick Whitbeck was the keynote speaker at the joint Kenai/Soldotna Chamber of Commerce luncheon.  His talk was titled “Alaska’s Energy Workers and their Importance to Alaska’s Economy”.

Being a “facts-over-feelings” presentation, the crowd of 50 or so people were given statistics to back up Whitbeck’s assertion that nearly half of all jobs in the private sector are directly or indirectly tied to the resource development industries in Alaska, and they were presented with a list of development opportunities that Power The Future sees as significant and important for Alaska’s energy workforce.

From continued North Slope exploration and drilling, to OCS and ANWR development, to additional fields in Cook Inlet, oil and gas opportunities abound.

Mining has six prospects in permitting, and many more – especially in the Ambler Mining District – could soon join them.The Timber industry has an opportunity for a rebound, with planned leases in the Tongass National Forest.

However, Whitbeck cautioned, each and every one of those projects face opposition from environmental groups, determined to thwart any and all possibilities to grow Alaska’s economic base.

The groups fighting to ruin Alaska’s bright future need to hear from the majority, Whitbeck stated, because without the majority voice chiming in, the press, talk radio and government agencies only hear from the extremist positions.

That’s why organizations like Power The Future exist – to give a voice to energy workers across America, who are powering the nation’s rise toward energy independence.  Alaska is well-positioned to be a key driver in this movement.  We welcome like-minded Alaskans to join us as we protect the jobs – and encourage additional work – for responsibly-done resource development and energy production across Alaska.